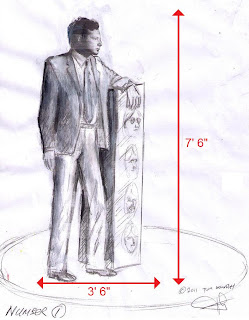 Brian Epstein's father Harry died on holiday in Bournemouth on 7 July 1967 after suffering a heart attack.
The news shattered Brian who had only just come out of rehab at the Priory clinic where he had been treated for acute insomnia. With his brother Clive he returned to Liverpool to be with their distraught mother Queenie.
But Harry's funeral at the Greenbank Drive Synagogue was followed just a few weeks later by another - that of Brian himself who was found dead at home in Chapel Street, London on 27 August 1967.
It was a sad end to the man who had shrewdly masterminded the ascent of The Beatles from rough-hewn rock 'n' rollers to showbiz charmers and ultimately found them the space in which their creativity could truly flourish. For many commentators Brian's death marked the beginning of the end for The Beatles. Without Eppy there was no-one to mediate and the group was consumed by petty disputes and bickering.
Incredibly, Brian's memory has never been publicly honoured in his home city of Liverpool and a campaign has grown up in recent years to create a permanent statue in memory of his legacy.
After months of pressure, Liverpool City Council has given permission for a bronze statue and plinth to Brian's memory to be put up in the garden of Epstein House - Brian's childhood home in Anfield Road which is now run as a guest house and home to the world's largest collection of Epstein memorabilia.
The statue has been designed by highly-regarded LIverpool sculptor Tom Murphy whose previous works include statues of John Lennon, Bill Shankly, Billy Fury, Ken Dodd, Harold Wilson and Dixie Dean.
'As you can see it will be more than just Brian Samuel Epstein RIP, Tom Murphy also plans to add three dimensional work of the Fab Four in the upright plinth,' says Patrick Duggan of Epstein House.
Campaigners have now begun fundraising to pay for the statue.
Find out more here.
Posted by Yeah Yeah Yeah: The Beatles and Bournemouth at Sunday, September 11, 2011