Beatles - Bournemouth to the USA 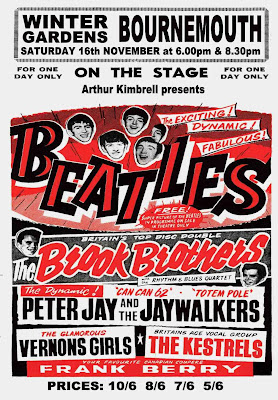 If anyone had been in any doubt after their summer season at the Gaumont in August, The Beatles' shows at the Winter Gardens in Bournemouth on 16 November 1963 at the height of what the Daily Mirror had dubbed Beatlemania just a fortnight before, confirmed their popularity as a cultural phenomenon the like of which Britain had never seen before.
Shortly before the autumn tour Brian Epstein had flown to the United States and secured a deal that would see The Beatles appear on the Ed Sullivan Show the following February. When the US news networks CBS, ABC and NBC got wind of it they dispatched reporters to find out what all the fuss was about - after all, The Beatles hadn't had even a hint of a hit Stateside at this point.
With the presence of camera crews from all three networks whose footage would introduce them to America, it was a high-pressure date for The Beatles who were further prevented from getting to the sanctuary of their dressing room ahead of the first show by five stowaway fans who had to be removed.
The actual concerts were standard Beatles’ shows of the era. The 13th date of their autumn tour of Britain and Ireland, they played the same ten-song set throughout.
Opening with I Saw Her Standing There, the first track on their debut album; they followed with hit single From Me To You; All My Loving; versions of The Miracles’ You Really Got A Hold On Me and Chuck Berry’s Roll Over Beethoven, which were all to appear on With The Beatles, their second album which came out on 22 November.
Two more covers – The Shirelles’ Boys with Ringo on lead vocals; and Meredith Wilson’s Til There Was You from the musical The Music Man – followed, before they played their smash hit She Loves You and ended with two classic R&B belters, Barrett Strong’s Money (That’s What I Want) and, of course, the Isley Brothers’ Twist and Shout.
Here's NBC host Jack Paar talking about The Beatles coverage he broadcast on 3 January 1964.