Bacon, eggs and The Beatles in Bournemouth 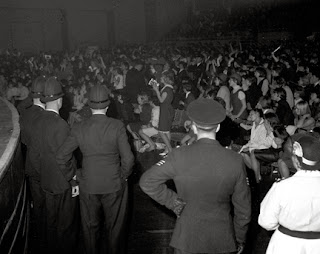 The Beatles’ return to Bournemouth to play the Winter Gardens on 16 November 1963 was a pivotal moment in their eventual conquest of America, with film crews from the three major US TV networks on hand to film them.
It also provided an expected highlight in the life of Bournemouth socialite Javier Revuelta Pineiro... even though he had no idea who they were!
Freelance journalist Roger Guttridge uncovered the story following the publication of Yeah Yeah Yeah: The Beatles & Bournemouth.
Following the madness of the two shows at the Winter Gardens that night, The Beatles were spirited away in a Black Maria to Madeira Road police station. But before they went back to the Branksome Towers Hotel at Branksome Chine they decided to go for  a bite to eat and returned to a late night restaurant in Exeter Road they had frequented during their summer season in August. 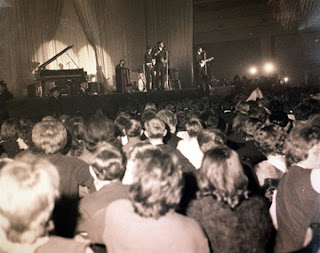 The Beatles on stage at the Winter Gardens

The doorman turned them away initially as that night it was closed for a private party hosted by Mr Pineiro, known as Rev to his friends, and his new wife Joan who were celebrating with friends and family who had been unable to attend their wedding on 26 October.
Being more of a jazz fan than pop, Rev didn't know who they were but let them in on the recommendation of his best man.
He recalled: “Ringo came over and said, ‘We’ve eaten here before after the show. Can we join the party?’"
Rev offered to cook for them himself and asked what they would like.
“Ringo said they’d like eggs, bacon, sausage and chips and I cooked them their meal. They were smashing lads and one of them asked how they could repay us. I said I didn’t want anything so they offered to go out and get their stuff and play for my guests.
“They played and mucked about for an hour. Twenty or 30 girls also turned up and the party went on till 2 o’clock in the morning. John Lennon gave me his personal number and the Cavern Club number and said they would repay me.”
:: Yeah Yeah Yeah: The Beatles & Bournemouth is available at a special price in time for Christmas. Order here.
Posted by Yeah Yeah Yeah: The Beatles and Bournemouth at Sunday, December 08, 2013