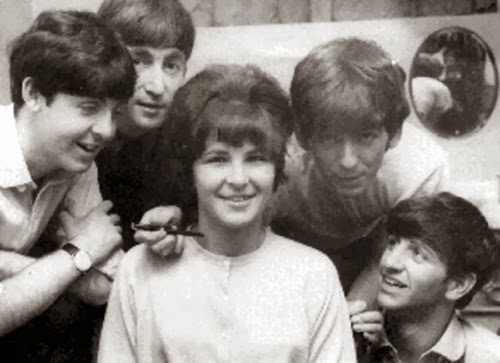 A lucky fan meets The Beatles backstage at the Gaumont
Barely a day passes without a Beatles golden anniversary of some kind - 50 years ago today for instance they were on a train headed for Newton Abbot filming sequences for A Hard Day's Night.
They were exciting times to be young and in love with music. With the screams of the previous year's Beatles' shows still ringing in the rafters, Bournemouth's Winter Gardens played host to concerts by The Rolling Stones on 22 February 1964 and the Gaumont had Cliff and the Shadows to look forward to on 29 March.
Not to mention the return of The Beatles of course on 2 August and 30 October.
In a story that has come to light since the publication of Yeah Yeah Yeah: The Beatles & Bournemouth, Geoff Purkiss from Parkstone remembers seeing The Beatles' final show in Bournemouth, at the Gaumont on Friday 30 October 1964. They shared the bill with R&B star Mary Wells - the first Motown artist to tour the UK - as well as The Remo Four, The Rustiks, Sounds Incorporated, Michael Haslam, Lorne Gibson (replacing Tommy Quickly) and compere Bob Bain.
Geoff recalls: "It was the Mary Wells concert, and it was just by good luck that I was there. I
was playing table tennis with a rather pretty new member at St Peter's Church youth club in Parkstone and a friend asked for a quick word. He had bought two tickets for the Beatles with the intention of persuading a girl he rather liked to go with him. Unfortunately she declined his offer, so he just wanted to get rid of the tickets! 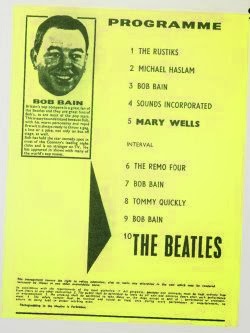 "I said: 'Hang on a minute,' and asked my table tennis partner if she fancied going to see The Beatles with me at the weekend. Of course she agreed! And we were together for the next five years or so... until she fell for someone in a uniform!"
The Beatles' set: Twist and Shout, Money, Can't Buy Me Love, Things We said Today, I'm Happy Just To Dance With You, I Should Have Known Better, If I Fell, I Wanne Be Your Man, A Hard Day's Night, Long Tall Sally.
:: Visit www.natula.co.uk/BournemouthBeatles.html to order copies of Yeah Yeah Yeah: The Beatles & Bournemouth at a special price.
Posted by Yeah Yeah Yeah: The Beatles and Bournemouth at Wednesday, March 05, 2014