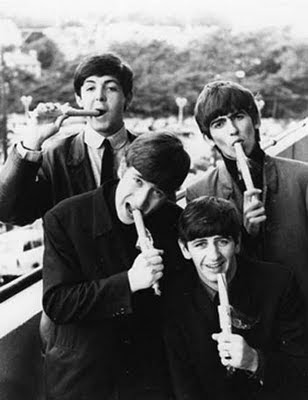 
The definitive account of the connections between the greatest rock ’n’ roll group that ever was and a small town on the south coast of England
- In just 14 months from August 1963 to October 1964 The Beatles played more shows at the Bournemouth Gaumont than any other concert venue in the UK outside London.
- A tape of a full Beatles concert recorded during their first visit to Bournemouth is the earliest known example of their theatre show. Despite the excellent quality of the recording it remains unreleased.
- The iconic cover photograph for the With The Beatles and Meet The Beatles albums was taken in Bournemouth.
- Howie Casey, who played with Wings in the 1970s and has lived in Bournemouth since 1978, has links with The Beatles that go back to their very earliest days. With his band The Seniors, Howie was at the same audition in 1960 when John, Paul and George first performed as the Silver Beatles. The Seniors were the first Liverpool band to go to Hamburg, paving the way for The Beatles.
- The first American TV audiences saw of The Beatles was not the Ed Sullivan show as is widely believed, but film from the band’s appearance at the Winter Gardens, Bournemouth two months before.
- George Harrison’s first Beatles song, Don’t Bother Me was written while staying in Bournemouth.
- John Lennon bought his Aunt Mimi a home just outside Bournemouth and until he left the UK in 1971 was a regular visitor to the area.
- The story told in The Ballad of John and Yoko began while John was travelling to Mimi’s house before he ended up “standing in the dock at Southampton”
- Launched in August 1963, Beatles Monthly conducted its first extensive interviews and photo shoots with the band in Bournemouth, forging a relationship that resulted in the magazine being published for almost 30 years.
With previously unseen and rare photographs of The Beatles taken in Bournemouth, photos licensed from Beatles Monthly and unpublished images of Mimi at home, the story is told using first-hand accounts from the people who were there – the fans, reporters, photographers, venue staff and musicians.
Yeah Yeah Yeah: The Beatles & Bournemouth is published on 22 September 2011 by Natula Publications, ISBN 9781897887899.
For more information and pre-orders email sales@natula.co.uk
Posted by Yeah Yeah Yeah: The Beatles and Bournemouth at Friday, July 01, 2011