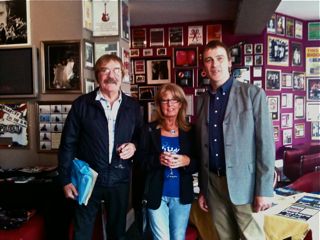 
It's always great to see them, but it was especially kind of Howie and Sheila Casey to pop their heads round the door at Sunday's launch event and Beatles Day at the Bournebeat Hotel as they'd been out gigging the night before!
Howie wrote the foreword to Yeah Yeah Yeah: The Beatles & Bournemouth and both have shared memories of playing with The Beatles and being around the Fab Four.
They weren't the only ones to ask me why I thought it was a good idea a book about The Beatles' connections to Bournemouth.
I ended up telling the Daily Echo in a feature I wrote for them which has been published today and appears on their website with a lovely comment from Aunt Mimi's former milkman.
But in case you missed it, here's the text...

OF all the things to write your first book about, why choose The Beatles?
After all, millions of words and thousands of books have already been written about the group whose recorded output is the closest we have to a universal language. There’s barely a place on the planet where The Beatles are unknown and not a second passes without their music being played by someone somewhere.
In that sense The Beatles left their mark on Bournemouth the same as anywhere, but what has rarely been acknowledged is how much events in Bournemouth contributed to the history of what many consider the greatest rock ’n’ roll group of them all.
Yeah Yeah Yeah: The Beatles & Bournemouth makes those connections and cements them with a wealth of previously unpublished photographs.
As an ambitious and shrewdly managed young group, The Beatles were made incredibly accessible to the press in 1963 and 1964. Freelance photographer Harry Taylor made the most of that access, but the Bournemouth Times published only a handful of the shots he took of The Beatles in their dressing room or hotel, at dinner, even partying after a show at the Gaumont.
The Beatles finished touring in 1966, a year after John Lennon had bought his aunt Mimi a harbourside home at Sandbanks where she lived until her death in 1991. Having spoken to people who spent time with her there, I think history has been cruel to the woman portrayed as a manipulative snob in Sam Taylor-Wood’s film Nowhere Boy. In words and photos they recall her as a charming, private woman who couldn’t quite separate John Lennon’s fame from the little boy she brought up from the age of five.
In many ways, this is the most intriguing aspect of the story because it is the most unknowable. The truth has long been clouded by history so all we have left is interpretation and, as such, it neatly encapsulates the continuing fascination with all things Beatles.
I’ve spent most of my adult life writing about music and many other things in and around Bournemouth and heard dozens of stories about the times The Beatles came to town. I’m not alone in finding each new one as gripping as the last, at once prosaic and enthralling. I don’t need to know that John, George and Ringo had steak and chips, but Paul had a lightly-poached egg on toast when they stopped at Asker’s Hotel between Dorchester and Bridport on November 13, 1963 – but I’m oddly glad that I do.
I’m still not sure if I found The Beatles or they found me. Sgt Pepper’s Lonely Hearts Club Band was released on my first birthday (June 1, 1967), but it was years before I heard it as mum and dad weren’t interested. And yet they had three early Beatles singles in the radiogram and by the time I was six or seven I was in the habit of taping a hairbrush to the Ewbank carpet cleaner to make a mic and stand and miming along to I Want To Hold Your Hand, Can’t Buy Me Love and I Feel Fine.
Back then, yesterday was so far away that anything before that belonged in a history lesson. I made little distinction between 1963 and 1863… it was a black and white world of before now, long ago and far away. I’ve still got those records..
Yeah Yeah Yeah: The Beatles & Bournemouth is available in paperback by Natula Publications, price £17.95. Available at www.beatlesandbournemouth.com.
Posted by Yeah Yeah Yeah: The Beatles and Bournemouth at Tuesday, September 27, 2011