It took me years to write, will you take a look? 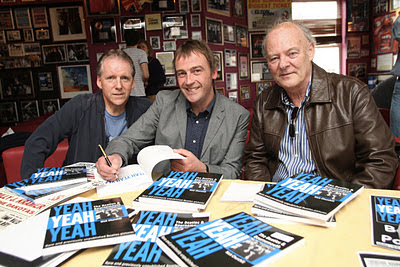 Beatles fans Arthur Macfarlane (left) and Martin Bartlett, who appears in the book, with me at the Beatles Day launch event in Bournemouth in September. Photo by Richard Crease, Daily Echo

People keep asking me, so how did I come to write a book about The Beatles?  After all, it’s not like there’s any shortage of Beatles books, many of them written by people far more qualified to do so than me. But the thing with The Beatles, more than any band before or since, is their music belongs to all of us.

Nearly 50 years after they released their first single, The Beatles’ music is almost part of human DNA, something that connects young and old alike across national boundaries, a shared consciousness. Man.

Which is a roundabout way of explaining how The Beatles left their mark on my tender ears growing up in the late 1960s and 1970s in the village of Stoborough on the Isle of Purbeck in South Dorset, at least hundreds of miles away from anywhere to do with The Beatles. Or so I thought.

I don’t know why dad and mum had three Beatles' singles in the radiogram because they weren’t fans, but those records constitute my earliest musical memories. I used to tape a hairbrush to the Ewbank carpet cleaner and sang along to I Want To Hold Your Hand, I Feel Fine and Can’t Buy Me Love so many times I still know the words by heart.

All through the punk rock wars and into my immersion in the Mod revival, those songs stayed with me. They were there when I was dancing to Northern Soul all night and right at home next to later passions like The Stone Roses. By the time their mix of classic guitar pop and dance music’s sensibilities had morphed into Britpop I was less concerned with music of the moment and far happier in the broad church of sound to which The Beatles ministered.

(It’s worth noting that childhood exposure to The Beatles also instilled in me a healthy distrust of heavy metal and it’s bratty American cousin, grunge. I Hate Myself and Want To Die? Not round our way, Kurt!)

And so to Yeah Yeah Yeah: The Beatles & Bournemouth…

I first heard stories about Beatles’ concerts as a kid. They always seemed to be told by hairy hippy types with acoustic guitars and too many folk records who had ‘grown out of all that’, but when pressed would reveal they had such tremendous fun. By the time I heard the first Clash album I already knew about The Beatles playing in Bournemouth so when Clash fans rioted in the Winter Gardens in 1977 and the town’s burghers called for punk rock to be banned, I knew it couldn’t have been much worse than Beatles fans wetting the seats more than a decade earlier.

I was further tantalised a few years later when an old boy on Wareham Quay correctly spotted the Beatles reference in the Nelson cap I was sporting on top of my teenage Mod regalia and told me John Lennon had a drink in the Quay Inn one night. He couldn’t add to the story, didn’t talk to the Beatle, just noticed he’d come in the pub. A few months later I got up to go to school and dad told me John Lennon had been shot dead. That made me sad.

And ever since then I’ve never been far from a Beatles story with a Dorset connection. There’s the waterside home John Lennon bought his beloved aunt Mimi at Sandbanks, the instantly recognisable half-shadow cover shot for With The Beatles that was taken in the Palace Court Hotel in Bournemouth, George Harrison writing his first song in the same hotel, American newsreel footage of the Winter Gardens concert, people who met The Beatles and McCartney’s ex-Wings-man, sax player Howie Casey who was there the first time John, Paul and George played as the Silver Beetles. He said they were rubbish, but when they joined him in the fleshpots of Hamburg a few months later they were well on their way to becoming the greatest band the world has ever known.

The stories mounted up, my interest only grew, but was I alone? Who else could share this passion for the improbable links between The Beatles and Bournemouth?
The die was finally cast when, after more than 20 years plying my trade in regional journalism, I was granted access to a cache of rare and previously unpublished photographs of The Beatles taken in Bournemouth.

What else could I do but start writing?

Posted by Yeah Yeah Yeah: The Beatles and Bournemouth at Tuesday, November 08, 2011