The Byrds and The Beatles

Of all the stories connecting The Beatles and Bournemouth, one of the most intriguing is the enduring legend of The Byrds and the Beatles.
The story goes that the crowd screams heard on The Byrds’ 1967 single, So You Want To Be A Rock ’n’ Roll Star were lifted from a TV camera crew’s ambient recording of a Beatles audience at the Winter Gardens in Bournemouth on 16 November 1963.
Of course it’s known that the three American TV networks – CBS, ABC and NBC – all had crews at the Winter Gardens show and that CBS broadcast the first footage of The Beatles on US television in a CBS Morning News report on 22 November. CBS owned Columbia Records – home to The Byrds – so the connection is clear.

But the waters are muddied by none other than The Beatles’ arch publicist Derek Taylor who flew the nest at the end of their first American tour in 1964. Having started his own PR company in California, The Byrds were among his first clients and he was instrumental in positioning the group as the folk-flavoured American incarnation of The Beatles.
Never one to let the truth get in the way of an entertaining tale, Taylor would doubtless appreciate the confusion that has arisen since reliable sources such as  David Fricke’s liner notes to the 1996 CD reissue of The Byrds’ Younger Than Yesterday album and Johnny Rogan’s widely admired Byrds’ biography Timeless Flight Revisited both insist the screaming crowd was recorded by Taylor at Roger McGuinn’s request at a Byrds concert on 15 August 1965 at the Gaumont, Bournemouth. 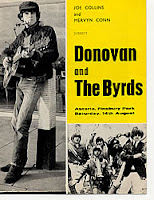 In the course of researching Yeah Yeah Yeah: The Beatles & Bournemouth I spoke to two people who saw The Byrds at the Gaumont that August and neither recalled any screaming at all, let alone the wall of noise that can be heard on So You Want To Be A Rock ’n’ Roll Star.
The other acts on the bill – Donovan, Elkie Brooks, Them, Kenny Lynch, Johnny B Great & the Quotations and Charles Dickens – were not known for eliciting ecstatic responses from their mid-60s audiences either.
And if further evidence were needed, session musician and songwriter Graham Dee who wrote, recorded and toured with Elkie Brooks, Them and the Quotations, as well as countless other acts including the Walker Brothers, recalls the band as an, at best, unreliable proposition on stage.
“I remember one show with The Byrds, I can’t remember who I was playing with, it might have been the Walkers, and the crowd was getting so restless while The Byrds 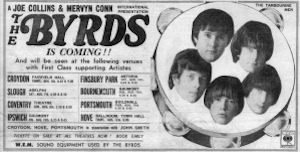 tuned up on stage the management hauled them off and sent us back on in case there was a riot,” he told me.
But whether or not So You Want To Be A Rock ’n’ Roll Star includes the screams of young Bournemouthians we’ll probably never know.
: Poster and programme from the Donovan/ Byrds show at the Finsbury Park Astoria the night before they played Bournemouth.
: Copies of Yeah Yeah Yeah: The Beatles & Bournemouth are available from www.beatlesandbournemouth.com as are art prints of several of the rare and previously unpublished photos from the book.
: The author's review of Roger McGuinn's show at Lighthouse Poole can be read here.
Posted by Yeah Yeah Yeah: The Beatles and Bournemouth at Thursday, April 19, 2012

Email ThisBlogThis!Share to TwitterShare to FacebookShare to Pinterest
Labels: Bournemouth, Derek Taylor, Gaumont, Roger McGuinn, So You Want To Be A Rock 'n' Roll Star, The Beatles, The Byrds, Winter Gardens, Yeah Yeah Yeah: The Beatles and Bournemouth