To mark Sir Paul McCartney's 70th birthday on Monday we thought we'd share this extract from Yeah Yeah Yeah: The Beatles & Bournemouth covering his return to the south coast with Wings in 1973 and Howie Casey's memories of what happened next. 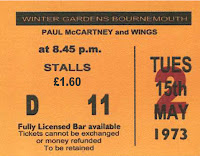 After releasing his solo album McCartney in 1970 and the following year’s Ram with Linda, Paul and his wife recruited former Moody Blues guitarist Denny Laine and drummer Danny Seiwell to form Wings. Wild Life, their first album, flopped but the follow up, Red Rose Speedway – and the commission to write the title song for the new James Bond film, Live and Let Die – re-established them.
With the line up augmented by guitarist Henry McCullough, the ensuing tour brought McCartney back to Bournemouth to play the Winter Gardens on 15 May 1973. He was the first – and, until 2011 when Ringo played the BIC, only – former Beatle to perform in the town. The tour was a success and did much to restore McCartney’s critical standing, giving him the foundation for Wings’ defining moment, Band On The Run, released that December. 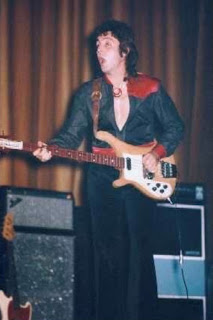 The album also put Paul back in touch with one of his earliest musical associates, sax maestro Howie Casey, who had been working with T-Rex and others alongside producer Tony Visconti.
A year later Howie – who now lives in Bournemouth with his singer wife Sheila, who had toured with The Beatles in 1963 with her sister Jeanette in the McKinley Sisters – got a call from McCartney’s office offering him a place in the touring band.
“I’d been on tour with Marc Bolan when they asked if I’d be interested in doing a tour with Wings,” he says. “Then I played on Wings At The Speed Of Sound and the triple live album Wings Over America; as well as Back To the Egg. I did the last UK tour and the final night of the Concerts for the People of Kampuchea.
“In between times Jeanette, Sheila and I had all been working for Paice, Ashton & Lord, a great band who never quite got the recognition they deserved. Then I got the call that Wings were going to tour Japan so we all made our way out there which was how I came to be in Tokyo when Paul got busted at the airport.
“We stayed out there while we waited to see what would happen. It was all paid so it was a little holiday like,” says Howie. “But then of course he got home and decided to put the whole thing on ice – his son James hadn’t long been born and he’s talked since about it being time to take a step back, so that was that.” 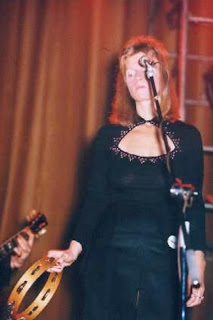 Howie and Sheila worked with Paul McCartney and George Harrison on Ringo Starr’s 1981 album Stop And Smell The Roses and have maintained loose links with McCartney ever since.

- Extract from the Yeah Yeah Yeah: The Beatles & Bournemouth which can be ordered at the official website.

- Photos of Paul and Linda onstage at the Winter Gardens 15 May 1973 © Bavarian Beatles Store, Ziegelfeld 1a, 85419 Mauern, Germany, www.bavarian-beatles-store.de
Posted by Yeah Yeah Yeah: The Beatles and Bournemouth at Wednesday, June 13, 2012