The Beatles' first review in Bournemouth 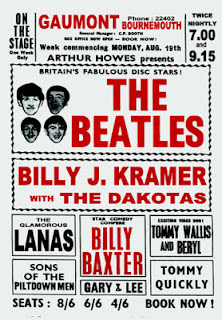 The Beatles arrived in Bournemouth on Monday 19 August 1963 to open a six-day summer season at the Gaumont cinema on Westover Road. By the time they left town on the Saturday, the single they had been touting all week - She Loves You - had been released and the die was cast ... within months they would be the biggest group in the world.
Here's what the Bournemouth Evening Echo had to say about that historic first show:

Into Bournemouth last night on a wave of enthusiasm almost unprecedented in pop history came The Beatles, the four young Liverpool men who have really set the world of pop music alight.
Little known outside Merseyside until a year ago, the group then travelled to London and made Love Me Do. Then followed Please Please Me and after that, also into first place on the Hit Parade, From Me To You.
But the proof of their popularity came with their new EP, Twist and Shout, which made musical history by not only getting in the Top Ten but also challenging for the no.1 position.
To a smaller degree they’ve made history locally because they are the first pop group to be booked into a local cinema for an entire week. Advance booking at the Gaumont theatre was good and queues all day yesterday look like being repeated all week. There are more than 25,000 seats to be sold at the Gaumont’s 12 shows this week and a fairly high percentage of them will go, I feel sure, after yesterday’s performances.
The audience enthusiasm was terrific, making most of the numbers completely inaudible, as is usual with these shows. Trying to listen, I suddenly realised why pop records sell so well. The fans buy them so they can listen to the words at home, then they know where to scream when they see their lads on the stage.
As well as writing most of their own material, The Beatles have been penning a couple for another group, The Dakotas, who were joined in January by tall, good-looking Billy J Kramer.
Yesterday, Billy celebrated his 20th birthday, and a welcome present was the news that his latest record, Bad To Me, was on top of the Hit Parade. This was written for him by John Lennon and Paul McCartney, but I’ve a feeling that The Beatles’ own She Loves You, tried out on the audience yesterday and to be released on Friday, will soon be at the top.
Completing the line up are newcomer Tommy Quickly, the Three Lanas, versatile Tommy Wallis & Beryl, brash compere Billy Baxter – some poet! – and the oddly named but effective-sounding Sons of Piltdown Men, with Gary and Lee.

Email ThisBlogThis!Share to TwitterShare to FacebookShare to Pinterest
Labels: Bad To Me, Billy Baxter, Bournemouth, Evening Echo, Gaumont, Please Please Me, She Loves You, The Beatles, Yeah Yeah Yeah: The Beatles and Bournemouth