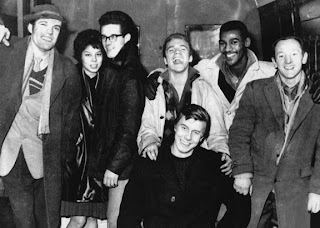 
Without the groundwork laid by musicians such as Howie Casey there wouldn't have been a beat scene in Liverpool in the early 1960s from which The Beatles could spring. Howie and others like him fell in love with R&B and swamped the clubs and dance halls with the sounds and songs of Little Richard and Chuck Berry. It wasn't long before Howie and his band, The Seniors, acted as vanguard for the Merseybeat bands and blazed a trail to Hamburg. Having first encountered the (then drummer-less) Silver Beetles in Liverpool and not been impressed Howie was shocked to hear they were also heading for Hamburg and worried in case their youthful incompetence spoiled the gig for the older hands.
But this was The Beatles and they were on their way. Not that Howie was averse to pulling rank on the young upstarts of course... he had the best gig (the Kaiserkeller) and got to sleep on an actual bed, using a Union Jack as a bedspread!Howie has lived in Bournemouth since the late 1970s and shares his story in Yeah Yeah Yeah: The Beatles & Bournemouth.

It's adapted here and the second part goes a bit like this...

The Beatles (they dropped the ‘Silver’ and adopted the new spelling just before leaving for Hamburg in August) had a booking at the Indra Club, close to the Kaiserkeller. With drummer Pete Best recruited just a few days before they left home and John’s art school mate Stu Sutcliffe on bass, The Beatles were still a five-piece – John, Paul and George all played guitar.
Their repertoire, like that of The Seniors, was mainly rock ’n’ roll standards with a few show tunes, cabaret standards and instrumentals thrown in. John Lennon later recalled songs had to be extended to fulfil the contracted set times.
“Every song lasted 20 minutes and had 20 solos in it. That’s what improved the playing. There was nobody to copy from. We played what we liked best and the Germans liked it as long as it was loud.”
When Bruno Koschmider, who controlled the Kaiserkeller and the Indra, decided he wanted non-stop music The Beatles and The Seniors used to swap members to give each other a bit of a rest.
“We had this idea to split the bands up so I played with a German drummer, our keyboardist Stan Foster, our singer Derry Wilkie and Stu Sutcliffe on bass. The rest of The Seniors played when we were off stage and the other four Beatles were doing shifts down at the Indra,” says Howie.
“But then we would all mix in together and jam with each other. In between sets we would sit and drink together and talk over our ambitions. We were all pretty much the same in that we wanted to make our living out of music. Like us, The Beatles had that confidence that youth gives you. 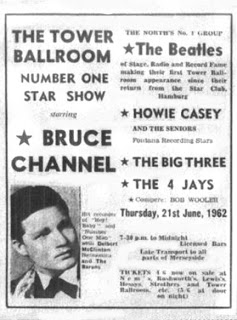 “It was the same back in Liverpool. We’d play a session at the Cavern, or The Beatles would, and then we’d go down the road and chat. But I don’t know to what extent we knew each other – it was just we were in the same game, trying to make our way. I was closer with the others than with John. I always felt he had his own agenda. Whereas the others were more sociable, John was always a bit stand-offish.”
Both bands continued the lucrative runs to Hamburg and were joined by others, including Rory Storm and the Hurricanes whose drummer, Ringo Starr, was soon to jump ship and join The Beatles. It was also in Hamburg that both bands met artist/photographers Klaus Voorman and Astrid Kircherr, credited with defining The Beatles’ early stage image by cutting their hair in the famous mop top style.
“I stayed in Hamburg until mid-1962 by which time The Beatles were going in other directions.
"Brian Epstein wanted to sign The Seniors, but I’d broken the band up the week before!
"I don’t know if we would have been any different. The Beatles had it all – the talent, the image, the good looks – but we were not the best-looking band in Liverpool!"
:: Yeah Yeah Yeah: The Beatles & Bournemouth can be ordered here at the special price of £14.95.
Posted by Yeah Yeah Yeah: The Beatles and Bournemouth at Sunday, April 28, 2013