As is its way, time has afforded us 20:20 hindsight with which to view The Beatles' shows at Bournemouth Winter Gardens on 16 November 1963. From a distance of 50 years they are rightly seen as a significant landmark in the history of the greatest rock 'n' roll group there ever was - the first footage shown of The Beatles on American television was shot at the Winter Gardens where crews from all three US TV news networks gathered to capture their first taste of Beatlemania.
But what of the reporters on the ground on the night? How did they react to what they found inside, outside and on stage at the theatre?
Here's what Stan Sowden at the Bournemouth Evening Echo had to say... 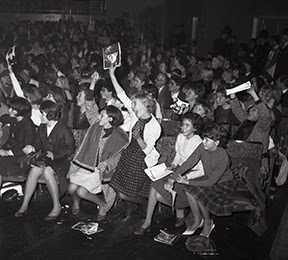 While everyone realised there would be some fantastic scenes at the Winter Gardens, Bournemouth on Saturday during the visit of The Beatles, no-one could have foreseen the fantastic scenes which occurred.
Twice the hall erupted into a crescendo of sound so intense one could not hear oneself shout. At one time it appeared as if everyone in the hall were on their feet, screaming and shouting.
The Beatles went through their act seemingly unconcerned. If they had stopped playing I doubt if anyone would have noticed.
There was an excellent support cast, particularly Peter Jay & the Jaywalkers. The Shadows, The Searchers, Freddie and the Dreamers and even The Beatles themselves - amid deafening screams - were mimicked excellently. The Vernons Girls brought a welcome touch of glamour, the Brook Brothers had a great reception, The Kestrels did well in that most difficult of all spots, just before the stars come on, and compere Frank Berry and the Rhythm and Blues Quartet kept things going with a swing.
But Frank's words were lost in the rising volume of noise which preceded The Beatles' appearance, and the next 20 minutes were almost beyond description.
Waving photos and banners, standing on seats, and screaming their heads off, the fans gave the TV cameramen something to record. Here and there, the odd member of the audience sat, seemingly unconcerned at the surrounding din. And here and there, girls sobbed uncontrollably.
The scenes at the Winter Gardens that night were unparalleled and are unlikely to be repeated until The Beatles come there again.
Stan Sowden, 18 November 1963
:: Photo courtesy of Bournemouth Daily Echo.
:: For the full story and more photos see Yeah Yeah Yeah: The Beatles & Bournemouth, which can be ordered here.


Posted by Yeah Yeah Yeah: The Beatles and Bournemouth at Thursday, November 28, 2013