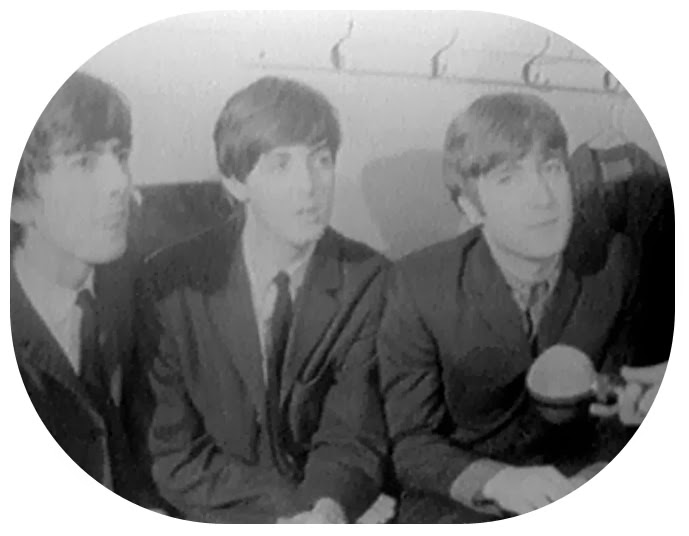 George, Paul and John interviewed by American television backstage at the Winter Gardens

It took Bournemouth a few days to recover from The Beatles' two shows at the Winter Gardens on Saturday 16 November 1963. The town was somewhat shellshocked by the fervour which greeted the group who just a few weeks before had played a six-night summer season at the Gaumont in Westover Road to enthusiastic crowds.
But since then their fourth single She Loves You - released the Friday of their Gaumont run - had stormed to the top of the charts and just two weeks before the Winter Gardens date the Daily Mirror had coined the phrase 'Beatlemania' to describe the public reaction.
Bournemouth felt the full force of Beatlemania and American television crews were on hand to record it. Those reports, first on CBS then NBC, gave US TV audiences a blueprint for how to react to The Beatles so that by the time they arrived in the States on 7 February 1964 to play the Ed Sullivan Show 50 years ago today (16 February) American teenagers were powerless to resist.
The sense that something big was in the offing runs right through the Bournemouth Times review of the Winter Gardens show. Published on 22 November 1963, reporter Tony Crawley had been in close company with the group during their Gaumont run in August, but bore witness to the new heights they were obviously scaling.
Here's what he had to say...

There was a bomb scare at the Winter Gardens minutes before the second Beatles show on Saturday night. A telephone call warned that a bomb had placed under the stage. Police searched and found nothing.
As it was, the place was full of bombs - the audience. The Beatles themselves were merely the time fuses. Very short fuses at that. As a game try was made to introduce the 'fab-tastic' wonders one by one, the audience literally exploded into a frenetic cascade of noise. One vast, seething, frightening mass of screams, shouts, sighs and sobs.
I've seen the incomparable Sammy Davis Jnr in cabaret and at the Palladium. I've seen the most emotional star of all, Judy Garland in a jam-packed palladiuym. I've seen Shirley Bassey rock the Winter Gardens thrice. And I've seen The Beatles on stage at least five times before.
But honestly, sincerely, I have never seen anything so frantic, frenzied or fantastic.
They had been immensely popular during their summer week's stay at the Gaumont. But their receptions were 50 times as great - 100 times as big as anything I've seen accorded to Cliff, Billy, Adam and the rest of the Beatle-squashed ilk. Never before has a pop audience in this "staid" town gone quite so mad, quite so wild.
Seats, for which they had queued over three nights, were forgotten. They stood and swayed and shouted and stamped and waved pictures, handkerchiefs, or just arms. They tore hair, wiped their eyes, fainted, were revived and continued.
The Beatles looked as shyly nonplussed as usual - just played and sang on. As usual they never did anything to incite anyone. No wiggles, no pelvis gyrations. They just played their music. Dahsing about in and out of the emotional throng of fans, three American TV film units captured the unbelievable scenes for America - and the world.
The Americans were racing against time and each other to be the first to feature Beatlemania in the States - by Monday or Tuesday! Then their news film will be sold to other countries, I was told.
The NBC feature was for the company's Panorama-like Huntley-Brinkley Report compered from two cities by Chet Huntley and David Brinkley.
William Sheehan of ABC interviewed the lads and then filmed them in action - with their fans' reaction - and Josh Darsa of CBS did likewise for a news programme.
"It's the sort of story we could hold on to for a week or more," he said. "But now the other networks are here, we'll have to rush it home pronto."
Also covering the event, and accompanying The Beatles to the Branksome Towers Hotel, and on the next day to Coventry, was a photoreporting team from Life magazine.
"I thought they'd only scream at the end of each song," added Margaret Gardiner from Life naively.
I'll let the three young screamers who sat behind me and pierced my ears good and hard, answer that one: "We didn't pay to hear The Beatles. We can hear them at home any time on discs. We paid to see them - to scream for them. We practised screaming last night without records."
So now you know.

:: Recently discovered in the NBC vaults, this broadcast audio file of Edwin Newman's film for the Huntley-Brinkley Report report filmed in Bournemouth and originally shown on Monday 18 November 1963. Sadly the footage has been lost, but the report shown on CBS Morning News with Mike Wallace on 22 November and rebroadcast on 10 December is widely available on YouTube.
:: The full story of The Beatles and their many connections to Bournemouth is told in Yeah Yeah Yeah: The Beatles & Bournemouth, available to order at a special price here.
Posted by Yeah Yeah Yeah: The Beatles and Bournemouth at Sunday, February 16, 2014