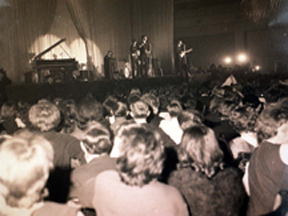 The Beatles on stage at the Winter Gardens, Bournemouth

The Beatles’ date at the Winter Gardens, Bournemouth on 16 November 1963 was a pivotal moment in their conquest of America with film crews from the three major US TV networks on hand to film them. Broadcast on 22 November, CBS footage from the Winter Gardens introduced The Beatles to American television and set in motion a chain of events that ensured I Want To Hold Your Hand was top of the USA charts when they landed in New York on 7 February 1964 ahead of their landmark appearance on the Ed Sullivan Show.

Barely a fortnight before the Winter Gardens shows the Daily Mirror had coined the term Beatlemania to describe the fevered reception The Beatles enjoyed wherever they went. They were the biggest band in the land and the Bournemouth audience was just as wild as any they encountered at that time. For their own safety they were delivered to the venue in a police van, which also took them away at the end of the night.

It had previously been thought they returned immediately to the Branksome Towers Hotel overlooking Branksome Chine where they stayed the night, but freelance journalist Roger Guttridge recently uncovered a fascinating footnote to the Winter Gardens episode. Writing in the Blackmore Vale Magazine, he reports The Beatles went in search of a late-night meal after leaving the Winter Gardens and found themselves at a restaurant in Exeter Road, Bournemouth where they had eaten the previous August during their week-long residency across town at the Gaumont.

But the doorman initially turned them away as the restaurant was closed for a private party hosted by Javier Revuelta Pineiro and his new wife Joan who were celebrating with friends and family who had been unable to attend their wedding on 26 October.

The host, known to his friends as Rev, recalls: “Ringo came over and said, ‘We’ve eaten here before after the show. Can we join the party?’”

Rev offered to cook for them himself and asked what they would like.

“Ringo said they’d like eggs, bacon, sausage and chips and I cooked them their meal. They were smashing lads and one of them asked how they could repay us. I said I didn’t want anything so they offered to go out and get their stuff and play for my guests.

“They played and mucked about for an hour. Twenty or 30 girls also turned up and the party went on till 2 o’clock in the morning. John Lennon gave me his personal number and the Cavern Club number and said they would repay me.”