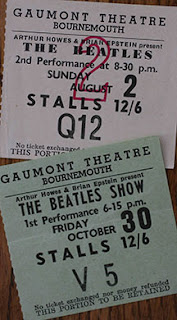 The Beatles’ final Bournemouth shows, back at the Gaumont on 30 October 1964, were part of a UK tour that saw them fly the flag for the music of black America that had influenced the songwriting of Lennon and McCartney from the earliest days.
Principal support act Mary Wells became the first Motown act to perform in the UK and the first female singer to open for The Beatles. Red hot from her biggest hit, My Guy, Mary Wells was named as The Beatles’ favourite American singer.
Ironically though she was in major dispute with Motown claiming money made by My Guy was being used to promote The Supremes' breakthrough hit, Where Did Our Love Go?

It lead to Wells being kept out of the recording studio, affording her time to tour with The Beatles, but effectively ending her Motown career. 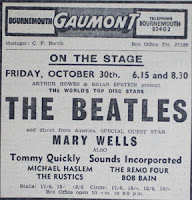 Mary always spoke favourably of her time with The Beatles.
'I admire them very much and as far as I'm concerned they're the best,' she told Merseybeat's Bill Harry backstage at the Manchester Apollo on October 14.
After talking to her Bill went into The Beatles' dressing room and told John she'd said she wanted to record a Beatles' song.
'He was thrilled and said he had a number for her to record, but nothing came of it,' remembers Bill.
:: Yeah Yeah Yeah: The Beatles & Bournemouth is available from www.beatlesandbournemouth.com
Posted by Yeah Yeah Yeah: The Beatles and Bournemouth at Thursday, November 15, 2012