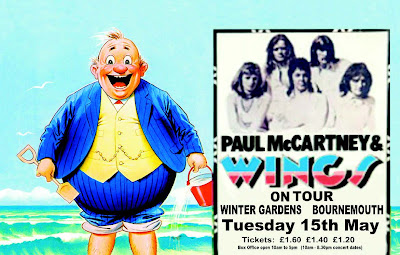 After releasing his solo album McCartney in 1970 and the following year’s Ram with Linda, Paul and his wife recruited former Moody Blues guitarist Denny Laine and drummer Danny Seiwell to form Wings. Wild Life, their first album, flopped but the follow up, Red Rose Speedway – and the commission to write the title song for the new James Bond film, Live and Let Die – re-established them.
With the line up augmented by guitarist Henry McCullough, the ensuing tour brought McCartney back to Bournemouth to play the Winter Gardens on 15 May 1973. He was the first – and, until 2011 when Ringo played the BIC, only – former Beatle to perform in the town.
The tour was a success and did much to restore McCartney’s critical standing, giving him the foundation for Wings’ defining moment, Band On The Run, released that December. 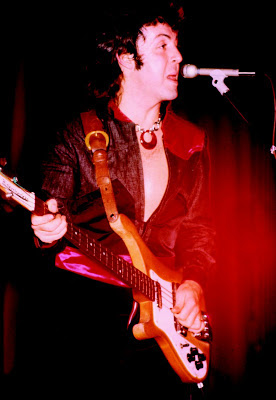 The full Wings set list at the Winter Gardens was: Soily, Big Barn Bed, When The Night, Wild Life, Seaside Woman, Little Woman Love, C Moon, Live And Let Die, Maybe I’m Amazed, My Love, Go Now, Say You Don’t Mind, The Mess, Long Tall Sally.
As ever in all things Beatles-related there are many more who know much more than your humble narrator and I again bow to the greater depth of knowledge and insight of the one they call Happy Nat at www.thebeatlesrarity.com …
“Paul chose to limit his band’s live performances to his home continent during these [early] years and play smaller venues such as universities and town halls, allowing time to build up Wings and make a name for themselves by getting at least a couple hit albums under their belts before attempting anything on a larger scale. He certainly did not want to rely on his clout as a former Beatle to sell Wings to the world and refused to include any Beatles music in any of the concert set lists of 1972-1973. It wasn’t until after the highly successful fourth Wings album Venus And Mars that Wings toured outside of Europe with a short Australian tour that included seven shows over the first two weeks of November 1975. It wasn’t until 1976 when Wings peppered the set list with songs from their newest Wings At The Speed Of Sound album and did a full fledged North American/ European world tour, which yielded the only live Wings album. 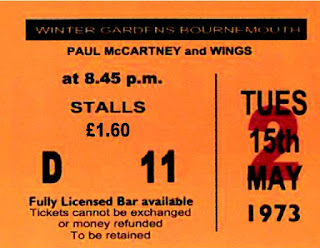 This was actually a triple album set titled Wings Over America which gave us a good two-hour sampling of the live performances from the 1976 shows, however they were somewhat doctored up after the fact."
:: More photos of Wings at the Winter Gardens can be found in Yeah Yeah Yeah: The Beatles & Bournemouth, available to order at the special price of £14.95 here.
:: Wings photo © Bavarian Beatles Store, Ziegelfeld 1a, 85419 Mauern, Germany, www.bavarian-beatles-store.de
Posted by Yeah Yeah Yeah: The Beatles and Bournemouth at Saturday, May 18, 2013