John Lennon - 'The most beautiful place I know' 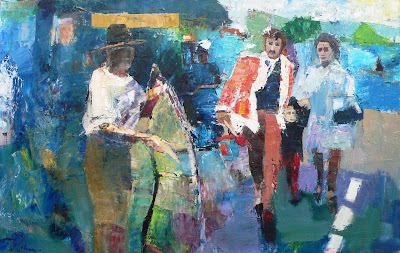 It was the summer of 1965 when John Lennon decided to get his beloved Aunt Mimi out of Liverpool and away from the fans that besieged the home in Menlove Avenue where he had spent most of his childhood.
He spent £25,000 on Harbour's Edge, a six-bedroom waterside bungalow at 126 Panorama Road, right by the Sandbanks to Studland chain ferry. He called it 'the most beautiful place I know'.
The neighbours kept to themselves and there was no more intrusion on her life than Mimi wanted. Her move that September was reported in the local press, but the rest of the world didn't much care.
Earlier that year The Beatles had recorded songs such as Help! and Ticket To Ride, in which John appears to be confronting the reality of his fame. Perhaps he recognised Sandbanks as a place he could hide away?
He certainly visited as often as he could over the next couple of years.
And perhaps his relationship to the area is perfectly encapsulated by the terrific photo that features in Yeah Yeah Yeah: The Beatles & Bournemouth in which he appears with Mimi and his son Julian by the ferry, clutching the boy on one hand a bucket and spade in the other. He's glaring at a cameraman who's presence is unexplained, although it might be the local TV press that Mimi referred to in an interview not long after John's death in which she blames the ferryman for tipping off the press who interrupted a private visit. 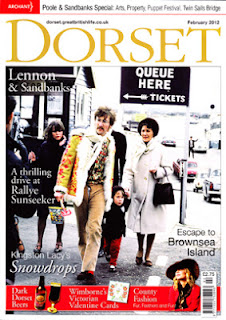 Conversely, Cynthia Lennon recalls John cavorting on the beach in a sun hat, shorts and blouse, turning cart wheels and totally ignored by the wider world.
John's love of Sandbanks - and the photo from the book - inspired Dorset artist Stephen Bishop to create this painting, The Collector, in tribute.
'I painted the homage to John Lennon as I am a fan of his solo and Beatles work,' says Stephen. 'I love the Beatles and think they exemplify artists who are both creatively fantastic, experimental and successful. I love the way they developed in such a short space of time. They inspire me.
'Born in 1963 and enjoying family holidays in Purbeck (camping at Tom's Field in Langton Matravers) I have fond memories of taking the ferry at Sandbanks from the late 60s onwards. I adore the photo of John with Mimi and Julian.
'I feel an emotional attachment to what it represents. It shows a proud father with his son and I find it touching as this relationship wasn't as full or constant as either would have liked it to be. In my painting, The Collector, I have also referenced images from earlier times in Dorset.
'The figure sharpening a scythe replaces the photographer in the photo and for me is a intimation of what would happen to John in New York, a victim of his fame. The Collector is the title of a John Fowles novel that I like  and also refers to the toll that must be paid to cross on the ferry.'
More of Stephen's new work will be on show at the ARThouse Gallery in Bournemouth's Russell-Cotes Museum in August.
He'll also be exhibiting at L'Artishe Contemporary Art Gallery, Swanage from 21 September to 12 October.
:: Order Yeah Yeah Yeah: The Beatles & Bournemouth at a special price from here.
:: More about Stephen Bishop at www.stephenbishop.co.uk.
Posted by Yeah Yeah Yeah: The Beatles and Bournemouth at Saturday, June 08, 2013