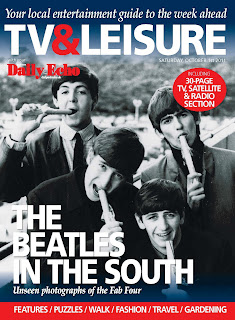 Saturday's Southern Daily Echo featured a TV & Leisure magazine cover story about Yeah Yeah Yeah: The Beatles & Bournemouth.
As many know the town's Beatles connection actually started in Southampton when Bournemouth-based reporter and photographer Tony Crawley and Harry Taylor were dispatched to interview French singer Louise Cordet who was appearing with The Beatles at Southampton Gaumont on 20 May 1963 - three months before they got to Bournemouth.
The report featured a selection of photos from the book including previously unpublished shots of The Beatles with Louise Cordet and Gerry and the Pacemakers.
Here's the text from feature writer Keith Hamilton's article...