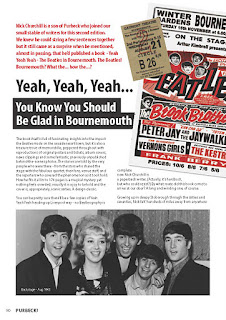 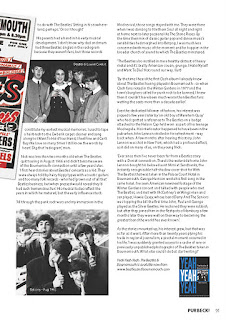 The second issue of Purbeck! magazine includes a fine feature on Yeah Yeah Yeah: The Beatles & Bournemouth based on little more than the accident of geography that resulted in the author being brought up in that most beautiful part of South Dorset.
The full text is reproduced below by kind permission.
Copies available here.

Nick Churchill is a son of Purbeck who joined our small stable of writers for this second edition. We knew he could string a few sentences together but it still came as a surprise when he mentioned, almost in passing, that he’d published a book – Yeah Yeah Yeah: The Beatles & Bournemouth.


The book itself is full of fascinating insights into the impact the Beatles made on the seaside resort town, but it’s also a treasure trove of memorabilia, peppered throughout with reproductions of original posters and tickets, album covers, news clippings and some fantastic, previously unpublished behind-the-scenes photos. The stories are told by the very people who were there - from the stars who shared the stage with the fabulous quartet, their fans, venue staff, and the reporters who covered the phenomenon as it took hold.


How he fits it all in to 174 pages is a magical mystery yet nothing feels crowded; visually it is a joy to behold and the cover is, appropriately, iconic sixties. A design classic.


You can be pretty sure there’ll be a few copies of Yeah Yeah Yeah heading up Liverpool way - no Beatleography is complete now Nick Churchill is a paperback writer.


By what route did this book come to arrive at our door? A long and winding one, of course. Growing up in sleepy Stoborough through the sixties and seventies, Nick felt ‘hundreds of miles away from anywhere to do with The Beatles.’ Sitting in his nowhereland, perhaps. ‘Or so I thought’. His parents had a hand in his early musical development.
‘I don’t know why dad and mum had three Beatles singles in the radiogram because they weren’t fans, but those records constitute my earliest musical memories. I used to tape a hairbrush to the Ewbank carpet cleaner and sang along to I Want To Hold Your Hand, I Feel Fine and Can’t Buy Me Love so many times I still know the words by heart.’ Dig that ‘radiogram’, man.
Nick was less than two months old when The Beatles quit touring in August 1966 and didn’t become aware of the Bournemouth connection until a few years later.  ‘I first heard stories about Beatles’ concerts as a kid. They were always told by hairy hippy types with acoustic guitars and too many folk records - who had ‘grown out of all that’ Beatles business, but when pressed would reveal they’d
had such tremendous fun.’ His musical tastes reflect the years in which he matured, but the early influence stuck.
‘All through the punk rock wars and my immersion in the Mod revival, those songs stayed with me. They were there when I was dancing to Northern Soul all night and right at home next to later passions like The Stone Roses. By the time their mix of classic guitar pop and dance music’s sensibilities had morphed into Britpop, I was much less concerned with music of the moment and far happier in the broader church of sound to which The Beatles ministered.
‘The Beatles also instilled in me a healthy distrust of heavy metal and it’s bratty American cousin, grunge. I Hate Myself and Want To Die? Not round our way, Kurt!
‘By the time I heard the first Clash album I already knew about The Beatles having played in Bournemouth - so when Clash fans rioted in the Winter Gardens in 1977 and the town’s burghers called for punk rock to be banned, I knew
then it couldn’t have been much worse than Beatles fans wetting the seats more than a decade earlier.’
Ever the dedicated follower of fashion, his interest was piqued a few years later by ‘an old boy at Wareham Quay’ who had spotted the reference to The Beatles in the Lennon-esque Nelson Cap he’d worn as part of his teenage Mod regalia. His interlocutor happened to have been in the pub when John Lennon strolled in for refreshment – way back when. A few months after hearing this story, John
Lennon was shot in New York, which had a profound effect, as it did on many of us, on the young Nick.
‘Ever since then I’ve never been far from a Beatles story with a Dorset connection. There’s the waterside home John Lennon bought his beloved aunt Mimi at Sandbanks, the instantly recognisable half-shadow cover shot for With
The Beatles that was taken in the Palace Court Hotel in Bournemouth. George Harrison wrote his first song in the same hotel. I’ve seen American newsreel footage of the Winter Gardens concert and talked with people who met The Beatles, and met with McCartney’s ex Wings-man and sax player, Howie Casey, whose band Derry And The Seniors was on the bill the first time John, Paul and George played as the Silver Beetles. He reckoned they were rubbish, but after they joined him in the fleshpots of Hamburg a few months later they were well on their way to becoming the greatest band the world has ever known.’
As the stories mounted up, his interest grew, but that was as far as it went. After more than twenty years plying his trade in regional journalism, a pivotal moment occurred in his life.
‘I was suddenly granted access to a cache of rare or previously unpublished photographs of The Beatles taken in Bournemouth. What else could I do but start writing?’

Posted by Yeah Yeah Yeah: The Beatles and Bournemouth at Saturday, October 22, 2011