The interview that never was... 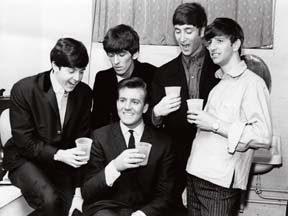 One such is from Edward Petty, who has been prompted to set up a blog called In My Lifetime to record some of his memories.
Edward met The Beatles at the Gaumont on 20 August 1963 under the pretext of interviewing them for a college magazine – he was a student at Bournemouth College of Art & Design in those days, studying to be a commercial artist.
Having gone to the show with a girlfriend, Jacquie, and friend Melvin, while queuing to get in Edward spotted the Gaumont manager who he knew and asked him if there was any chance of meeting The Beatles. The three teenage fans were told to wait while the manager made his enquiries. Soon after The Beatles started their first half set a man approached Edward and Jacquie (desperate to see his heroes Melvin had gone to take his seat) and introduced himself as The Beatles’ road manager.
Edward takes up the story…

‘I understand you would like an interview with The Beatles,’ he said! My heart was now thumping like Ringo’s drums as I fell into this suggestion. Off the top of my head I said: ‘Yes! I’m here to write an article on them for the college magazine.’ ‘OK,’ he said, ‘in ten minutes or so they will be having an interval, so you can meet them in their dressing room,’ and asked us to follow him.
‘I have never been so butterflied out in my life as he led Jacquie and me through the main doors to the aisle that led down through the theatre. I can remember to this day, the look of horror and disbelief on my friend Melvin’s face as he watched us from his seat as we walked by him and down to the side steps that lead up to the door that took us to the side of the stage. We were now stood in the wings watching our idols performing to all these screaming people out in their seats, where we should have been. We felt very privileged. It was a moment to cherish. They finished their set and retired to their dressing room before the next act took over, this was Billy J Kramer and the Dakotas.
‘The road manager returned to us and took us into the dressing room where The Beatles were sitting having a drink and a smoke. It was quite an intimate room and seating consisted of two three- or four-seater bench-type couches and a chair at one end. We were ushered in and I squeezed in between John Lennon and Ringo Starr, while Paul McCartney got Jacquie to sit on his lap on the chair. Opposite me sat George Harrison and as an extra surprise we were to learn about and meet John Lennon’s wife Cynthia.
‘It was not a known thing at the time that he was married.
‘It soon became obvious to everyone that we were not there to do an interview for any magazine. John was very quick to point out that I had neither notepad or paper or any device to record anything. Very soon we were laughing and joking about this. ‘Good on you.’ he said and we were not thrown out. I think they admired our cheek. ‘Noticing my college scarf that I wore in those days of yellow and blue stripes, John indicated he would like it.
‘I suppose we were with them about 15-20 minutes in all, it went too fast to recall every detail but before we were asked to leave I had to ask them for their autographs. This they all agreed to but again pointed out I had nothing to write on. My thinking quickly revealed that I had a wide tan coloured leather belt on and suggested they all signed this for me.
‘Different,’ they said, but all agreed and duly signed all around this belt including Cynthia next to John’s name. I was made up and over the moon. They were now expected back on stage, so we all shook hands with a few kisses for Jacquie and made our farewells.’

- Read the full story, including an all too familiar sting in the tail, at In My Lifetime.

- The photo above of Billy J Kramer with The Beatles in their dressing room at the Gaumont was taken between houses on 19 August 1963, when The Beatles held a party to celebrate Billy’s 20th birthday and his single Bad To Me – penned by Lennon and McCartney – getting to number one. Copies of the photo and many others are available to order here.
Posted by Yeah Yeah Yeah: The Beatles and Bournemouth at Monday, January 09, 2012