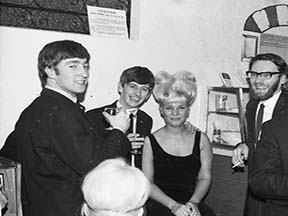 John and Ringo at the after show party in the bar at the Bournemouth Gaumont with reporter Tony Crawley and his wife, the actress Jeanette Wild. Photo by Harry Taylor © Dave Robinson


With stunning images of The Beatles taken in and around Bournemouth and never-before-seen images of John Lennon’s aunt Mimi at home in Sandbanks, the story is told using first-hand accounts from the people who were there – the fans, reporters, photographers, venue staff and musicians.


Exhibition highlights include Robert Freeman’s iconic half-shadow photo that adorned the With The Beatles album sleeve which was taken in the restaurant at the Palace Court Hotel in Westover Road (now a Premier Inn) during the Beatles’ week-long summer residency at the Gaumont in August 1963. Also on show are


posters from Beatles shows at the Bournemouth Gaumont and Winter Gardens, plus a remarkable colour photograph of John Lennon by the Sandbanks Ferry in Poole with his Aunt Mimi and four-year-old son Julian.


Lighthouse also hosts a Beatles Film Special on 28 February, with a screening of Richard Lester’s classic A Hard Day’s Night, which perfectly captures The Beatles in all their irreverent glory.


Nick Churchill comments: “Interest in The Beatles is as strong as ever and this part of the world played a significant part in their incredible story. The reaction to the book and these remarkable images has been astonishing and I’m really excited to see these photographs showcased in one of the south’s premier arts venues.”


Nick would love to hear new stories from anyone who saw The Beatles in Bournemouth and especially from people who met them.


“The links between this area and The Beatles are made even stronger by people’s memories of seeing the Fab Four or meeting them,” he says. “I’m sure there are lots more stories to be told by hotel and venue staff, fans or even passers-by who may have encountered John Lennon on a trip to Sandbanks to visit his Aunt Mimi.”


Paul Tucker, communications officer for Lighthouse adds: “Lighthouse is thrilled to have such an extraordinary exhibition in the building and it’s incredible to see photographs of members of such an iconic group in such recognisable local locations like Sandbanks and Westover Road. The top floor foyer is an ideal space to display exhibitions and we are using it regularly now, with particular focus on work either by local artists or that has an interesting local connection.”


Yeah Yeah Yeah: The Beatles & Bournemouth is published by Natula Publications, and will be available from Lighthouse ticket office shop or www.beatlesandbournemouth.com


- The photos are on show again this summer, from 9 July until 5 September in the Bourne Lounge at Bournemouth International Centre.

Posted by Yeah Yeah Yeah: The Beatles and Bournemouth at Tuesday, January 24, 2012