Yoghurt fights with The Beatles! 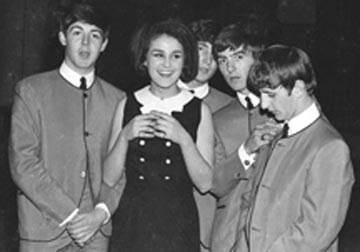 Anglo-French singer Louise Cordet, a god-daughter of Prince Philip, toured with The Beatles, Roy Orbison and Gerry and the Pacemakers in the spring of 1963, playing the Southampton Gaumont on 20 May where the Bournemouth Times team of reporter Tony Crawley and photographer Harry Taylor caught up with her on assignment for Cinémonde magazine.
The Beatles’ star was very much in the ascendant and the tour programme had been hastily rewritten to take account of their higher profile so that they were billed as co-headliners with Orbison.
Louise remembers the tour well and shares a series of anecdotes in Yeah Yeah Yeah: The Beatles & Bournemouth.

“They were really very sweet to me and we were always larking around. I would write something like ‘Fish Face’ on their mirror and they would hide from me around a corner then leap out and shower me with water. We had yoghurt fights, that kind of thing. But I had no clue who they were before I met them as I’d been on tour in France with Johnny Hallyday – who wasn’t terribly nice – and The Beatles hadn’t yet made much impact outside of the UK. So as far as I was concerned they were just another group, not at all starry, very humble. Nothing I’d seen could have prepared me for the reception given to The Beatles. I think they were a bit overwhelmed by it all.
“I had a chaperone with me because I was very young, just 18, and although they were obviously quite worldly by then after being through Hamburg and what have you, they were always very protective of me. I’m not sure why, maybe they saw I was a bit vulnerable.
“I remember sitting with John once and I don’t know that he opened up to me, but he told me about Hamburg saying people kept trying to push these substances on them but he wasn’t interested. Well, I swallowed all that in my innocence!
“He spoke about his aunt Mimi as well, saying how close he was to her and how she’d brought him up.
“I saw them a few times after the tour. I took a friend with me to see them north of London once and they asked us backstage. I saw them in Paris and Paul came to my
brother’s 21st birthday with Jane Asher, but we sort of lost touch after that.” 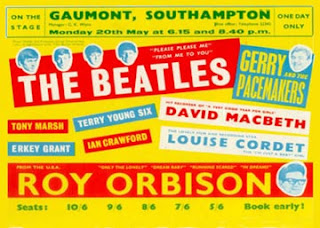 :: The full interview - and many others - can be found in Yeah Yeah Yeah: The Beatles & Bournemouth, available to order here.

Posted by Yeah Yeah Yeah: The Beatles and Bournemouth at Sunday, March 10, 2013